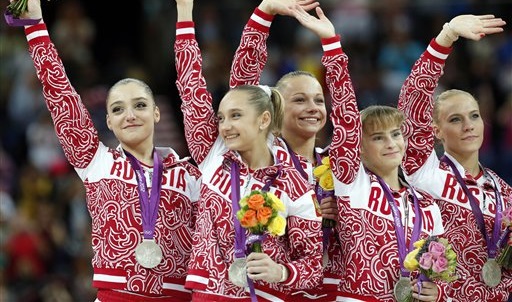 The Russian Cup started yesterday with the women’s team finals and as one can expect from any Russian competition there was lots of glitter, lots of tape, lots of falls and lots of surprises. The team representing Moscow was comprised by Alla Sosnitskaya, Maria Paseka, Seda Tutkhalyan and Daria Spiridonova won the team title with a comfortable lead over Central, which was represented by Ksenia Afanasyeva, Viktoria Komova, Maria Kharenkova and Evgenia Shelgunova. Tatiana Nabieva, Anastasia Cheong, Lilia Akhaimova and Alla Sidorenko, representing St. Petersburg earned the bronze medal.

2014 world and European bronze medallist Alla Sosnitskaya returned to competition after struggling with ankle injuries for the biggest part of the season. Besides a disappointing 12.967 after a fall on floor, she had a rather successful comeback, posting solid scores on the other three events. Surprisingly, her highest scoring event of the day was the uneven bars, where she showed a fantastic 6.4 start value. She was also impressive on balance beam, where she posted the third highest score of the day. I’m not sure if having her as their third best beam worker is necessarily a good thing for Russia, but it certainly is a big success for Alla herself. She is not quite at her old level and I’m not sure if she’s ready to make it to another world championships but she’s definitely on the right track and she has her old difficulty back on bars, beam and floor. She still has about a month to upgrade and improve and if there’s one thing Alla knows how to do, it’s to surprise us with her progress. 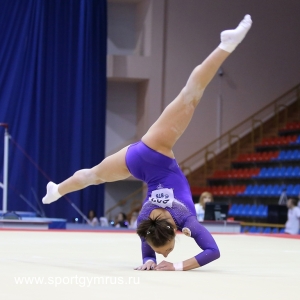 Her teammate, Maria Paseka was one of the most pleasant surprises of the competition. After being injured for the biggest part of her career, it looks like Masha could finally have her moment to shine. She earned a ticket to Russia’s Olympic team back in 2012 thanks to her vaults, and she still is the country’s best on this event. She will never be the cleanest gymnast out there, but her form has improved significantly, she has one of the best levels of difficulty in the world and she landed both her amanar and her cheng very well. However, Paseka proved that she’s not just a vault specialist anymore by showing one of the most impressive bars routines of the competition. She hit her spectacular opening combination (toe on full + Maloney + clear hip full + tkatcev + pak + van leeuwen) and she stuck her double front dismount for a massive 15.3, to place second on the event. Of course, this score is a bit generous, as scores on national competitions tend to be but that doesn’t change the fact that despite some minor form errors, Maria has an excellent routine that could receive high scores on worlds. She also competed on floor exercise, where she started her routine with a 2.5 twists + front full combination. She also showed a 1.5 twist into a rudi and a double tuck as well as gorgeous low to the floor choreography. In fact, I think she has one of the most artistic routines in Russia right now.

With Mustafina not competing at this meet and Komova only doing bars and beam, first year senior, Seda Tutkhalyan had a great chance to prove herself as her country’s top All Arounder. However, she didn’t manage to do that in the first day of the competition. She had a powerful and relatively clean (for her standards) double twisting yurchenko and a strong bars routine, finished with a gorgeous double front dismount but then, she struggled on her two best events. On beam she fell on her layout full and then she had a big wobble and touched the apparatus during a full turn. Yes, during a simple, A rated full turn! On floor she took her spectacular two whips + piked full in combination and brought back a relatively messy double layout and a 1.5 + rudi combination. She was having a fairly good routine, with entertaining choreography but she unfortunately fell on her dismount.

Europen champion Daria Spiridonova, took advantage of Seda’s mistakes and surprised us all by having the highest All Around total of the day. As expected, she performed a gorgeous and aggressive uneven bars routine, which included an inbar + inbar full + komova 2 + pak + van leeuwen combination, a sky high jaeger and a toe on full into a full in dismount. Then, she performed a BEAUTIFUL beam routine, which included a switch leap + ring leap combination, a switch ring, an onodi into a front aerial and a lovely kochetkova. She was never famous for her work on vault and floor, but her double backs were higher than usual and she landed her full twisting yurchenko without any trouble. 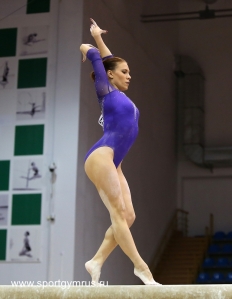 Two times Olympian Ksenia Afanasyeva is definitely very valuable to the Russian team and I couldn’t possibly be happier to see her back. Unsurprisingly, she posted the highest score on floor, after nailing her difficult dance elements and sticking her double layout  and her 2.5 twists + layout combination. Her triple full was a bit short and she didn’t perform her turn combinations though. She has a strong routine and she is very likely to qualify into world event finals, but In my opinion, her new music and choreography is rather disappointing. She also had an excellent double twisting yurchenko on vault and it will be interesting to see if she’ll perform an amanar at this competition. Her balance beam routine included a tour jete half, an onodi and an aerial round off. She’s just returning to this event but she seems to have her difficulty back and she posted an absolutely decent 14.367, which was the second highest score of the day on beam.

The lovely Viktoria Komova only competed on two events and didn’t have a great competition. Her balance beam was similar to most routines she has performed in the past. She just took my breath away with how well she performs something as simple as a back handspring + layout step out and a switch ring and she amazed me with the height she gets on her standing Arabian and her front tuck but then, she wobbled after almost every skill. On bars, which is usually her most consistent event, she attempted some upgrades, like a pak into a van leeuwen and a double double dismount but she fell on both of those skills, scoring only a 13.233.

Maria Kharenkova is one of Russia’s best All Arounders right now but she wasn’t able to live up to her potential at this competition. She didn’t perform her full difficulty from Euros on floor and bars so she wasn’t able to post massive scores on those events. On bars she showed beautiful lines and stunning toe point but she had minor form errors throughout the routine and she landed her full in dismount quite low. Her floor routine was beautiful and well executed, and her opening double Arabian is very clean but you can’t expect any huge numbers from an athlete who does a double full as her second pass. She had a chance to gain some ground on her best event, the balance beam but she fell on her layout and missed a couple of connections. On vault, she had no trouble with her full twisting yurchenko.

First year senior, Anastasia Dmitrieva who was representing Volga also had a very rough day. The only event where she was able to score above 14 was vault, and even there, she landed her double twisting yurchenko very low. She struggled on her best event, the floor exercise, falling on her double layout and having low landings on her full in and her double pike. Her choreography was as fun and entertaining as always though. She had an other fall on the uneven bars and she has never shined on balance beam so her All Around Total wasn’t very impressive. This is really a shame because Nastya could be a contender for the alternate spot of the worlds team so hopefully, she will be able to perform better during the next couple of days. Her teammate, Polina Fedorova, who was the alternate of last year’s worlds team also had a fall on the uneven bars and she only scored a 13.5 on her best event, the balance beam.

Everyone’s favourite Anastasia Grishina returned to the floor after a year away from competition. It was clear that after such a long absence, she would be unlikely to challenge for a spot in Russia’s worlds team and when she appeared with a knee brace, even her most loyal fans had to lower their expectations. However, that doesn’t mean we weren’t ridiculously excited to see her back. She competed on bars and beam, her start values were low and she had wobbles and mistakes but given the situation, I think she should be proud and happy that she got out there again. Hopefully, she will be able to stay healthy and continue to improve so she can be back in the mix by next year’s Olympics. If it was up to me, Grishina would be part of every single major team ever, just to make things a little bit prettier but since the sport doesn’t work like that, we can only hope she will manage to upgrade and show consistency in the future.

On the junior field, Junior European All Around champion Angelina Melnikova showed an improved double twisting yurchenko with an excellent landing and a very impressive bars set, which included a Komova 2 into a pak and a van leeuwen. On floor, she performed a powerful but messy piked full in, two whips into a high double tuck and plenty of difficult turns like a triple wolf turn, a double L and a memmel. A couple of them were a bit sloppy so this is something she needs to work on. Her level of difficulty on balance beam was impressive but she fell on her layout. EYOF All Around champion Daria Skrypnik must have had a couple of minor errors on the uneven bars, where she scored a 14.6. She was beautiful on balance beam, hitting a gorgeous front aerial + illusion turns

combination, an onodi and a 2.5 twists dismount. I absolutely adore her double stag jump and her opening combination and I’d love to see her improving her consistency on this event. She also nailed her floor routine. Her triple full was sky high and she stuck her 2.5 + front tuck and her double pike cold.

You can find the results of the competition here. All photos are from here